Listening and Learning from the Past

Listening and Learning from the Past:
The Restorative Process and the Home for Colored Children

On October 26th, 2022, I had the opportunity to see a preview of the upcoming exhibit “Journey to Light” at The Black Cultural Centre (“the BCC”). This experience was doubly exciting for me because Angela Davis and Margaret Burnham were also in attendance.

The Home opened in 1921 and was hailed as a success for decades; however, the real stories of those who lived and worked there were not being heard. These stories reveal childhoods of abuse and suffering, experiences the former residents kept to themselves for decades because of a lingering sense of shame. In 2012, however, former residents gathered, shared their stories, and began to break the silence.

The upcoming exhibit will feature these stories. The DOHR project, which is based out of the University of Waterloo, was developed in partnership with the former residents’ organization VOICES (Victims of Institutional Child Exploitation Society), the RI, and other organizational and community partners. DOHR developed a curriculum for high school classes, including a virtual storytelling experience aiming to help participants understand what residents went through at the Home. The exhibit at the BCC will include multiple virtual reality stations that will allow visitors to hear former residents recount memories of their time in the Home while immersed in a 3D visual representation of the Home. As Jennifer Llewellyn pointed out at the preview event, it is not designed to be an “empathy machine”; instead, it is a means of helping us learn from experiences of harm and resilience by travelling alongside former residents as they share their stories. The exhibit invites us all to be a part of the former residents’ journey to light by learning and considering what we might do to contribute to a better future. 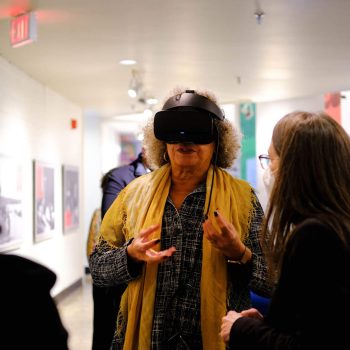 As a summer intern at the Restorative Lab, I was fortunate to take part in a workshop focused on how haptics (technology that brings the sense of touch) may be incorporated into the DOHR project and the museum exhibit’s virtual experience to enhance the experience and its social justice focus. I found the process to be impressively respectful and collaborative. The voices of former residents were central. While there could have been an instinct to use haptics wherever possible (after all, immersive technology is very cool), a presiding sentiment was that any digital experience must first and foremost be respectful of the lived experiences of the former residents, and not pretend to replicate them nor trivialize them by making the technology the focus of the experience. There was also a remarkable sensitivity to trauma and the need for safety.

The announcement and preview of the upcoming exhibit was led by three former residents of the Home and participants in the RI, namely Tony Smith, Gerry Morrison, and Tracey Dorrington-Skinner. They offered insights and accounts of their experiences with the restorative process. I had met a couple of these speakers before and heard them present in other contexts, as they are committed to sharing their stories widely and helping people understand the legacy and impacts of the Home. Indeed, Tony Smith spoke in a course in my sister’s Bachelor of Education program, where he emphasized the importance of education and of engaging upcoming generations, a value he reiterated at the BCC event. The former residents’ openness in recounting their stories both at the BCC event and elsewhere contributes to ongoing work against systemic racism in the form of education and the creation of a foundation of understanding.

It was refreshing to listen to people who, like me, believe there is a better way to do justice. I feel some of my friends think I am naïve in this belief. It can be hard, I understand, to break out of the assumption that retributive justice is the only way of doing justice, and that there is no way for people to move forward together when there has been so much harm. The RI and the former residents’ resolute commitment to breaking the silence, though, teaches that it is ok to inquire into our shared past to construct a meaningful future. Indeed, Angela Davis picked up on the sense of optimism and left attendees with a message of hope. Through the restorative process, it became possible to glimpse the potential for justice in something as massive as the Home and the systemic racism that created and sustained it. This hope in the potential for fuller justice and a better future allows us to continue to move forward together.

Prof. Margaret Burnham, Northeastern University School of Law faculty speaks at an event supporting the work of the Restorative Inquiry into the Home for Colored Children in Halifax Nova Scotia.

Relational presence is the core principle of a new approach to designing virtual learning environments (VLEs), which has been developed by the Digital Oral Histories for Reconciliation (DOHR) project (dohr.ca). Presence, normally understood as the sense of being in a virtual environment to the extent that one forgets the environment is virtual, is thought to have significant pedagogical benefits in K–12 experiential learning projects aiming to develop spatial and social competencies that learners can translate into actual-world contexts. DOHR, by contrast, aims to build the understanding needed for learners to address systemic racism in Nova Scotia, through an oral history and restorative justice–based curriculum. To serve this alternative learning goal, relational presence replaces presence. The usual emphasis in VLE design on simulation, interactivity, identity construction, agency, and satisfaction is replaced with new values of impression, witnessing, self-awareness and awareness of difference, interpretation and inquiry, and affective dissonance. This paper introduces relational presence in order to help establish, in the field of VLE design, a productive discourse around issues of justice, representation of marginalized communities, and pedagogy-led design.

Restorative Inquiries: Considering the Cases of Dalhousie Dentistry and the Nova Scotia Home for Colored Children

Tony Smith of VOICES/Home for Colored Children Public Inquiry discusses the future of restorative justice in Canada at the National Restorative Justice Symposium in Halifax, Nova Scotia on November 21–22, 2016.

Reconciling the Work of the TRC | Jennifer Llewellyn

The Restorative Inquiry for the Nova Scotia Home for Colored Children focused on meaningful accountability for systemic racism and pathways forward – by Jennifer Llewellyn, February 4, 2020

Report of the Motherisk Commission

This public inquiry was the first of its kind in Canada to take a restorative approach. The Inquiry was a part of the Government of Nova Scotia’s commitment to respond to the institutional abuse and other failures of care experienced by former residents of the Nova Scotia Home for Colored Children.